Something About A Cemetery.... 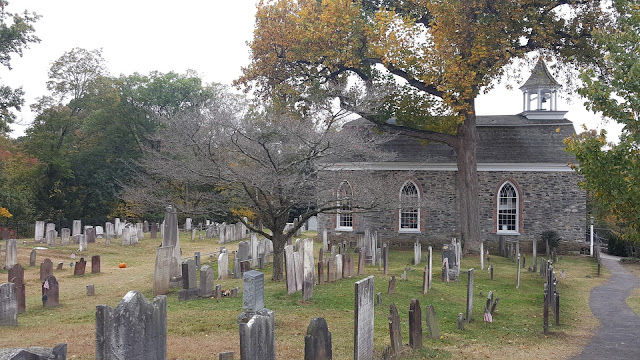 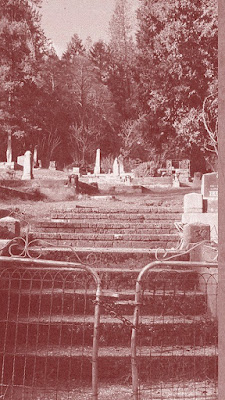 They dot the landscapes in a variety of displays. Some colorful, many elaborate, often hidden in unexpected places like tree-covered hillsides or forgotten plots in the desert. 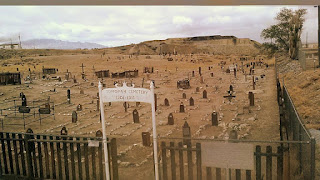 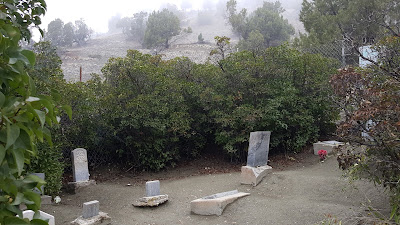 Death is big business because it seems to be one of a few things that have been prominent throughout history. With so many people here and gone, a variety of afterlife displays have come about. But one special version of this ritual comes in the form of a good old cemetery.

You may come across a wild character from history, such as the outlaw poet called Black Bart in Marysville.

Or the worn epitaph on the headstone of strange fiction writer H.P. Lovecraft in Swan Point.

The feeling of walking into- or stumbling upon- these places usually has a different feel to it, depending on the atmosphere. One may feel a sense of peace in the presence of simple stones, the scent of cut grass, and bright flowers fluttering in the breeze. That feeling might be opposite when surrounded by broken memorials on weeded hillsides and looming tree branches that have not seen a caretaker in years.
I have seen many varieties of these memorial grounds. 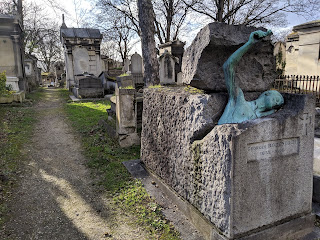 Every monument in the Père Lachaise Cemetery has its own uniqueness that seems to be built by an artistic sculptor. 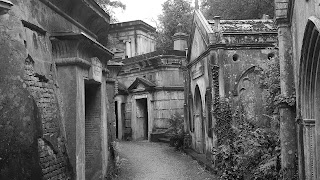 The creeping moss and brooding tombs in Highgate Cemetery breed good reason for the rumors of a vampire lurking around. 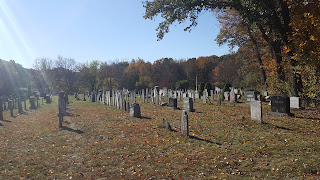 Union Cemetery, made famous by the Warrens claiming it to be one of the most haunted in the USA, has tilting stones and dates from centuries ago. 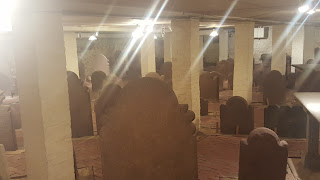 In New Haven, Connecticut there is a cemetery known as the Crypt On the Green. It resides in the basement under a beautiful church. 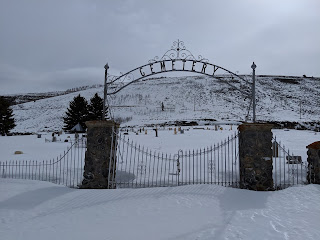 And the simple headstones from the Winter Quarters coalmine disaster rest on the hill overlooking Scofield, Utah. 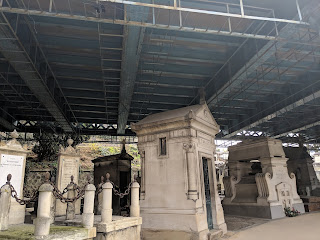 Honorable mention goes to the Montmartre Cemetery, much of which resides under a bridge busy with foot and auto traffic. It is full of wild, wandering cats who move about the crypts.

Many of these places seem quiet enough to meditate, but we often hear about the restless side of these places. Virginia City, Nevada has tales of glowing light with no natural source. Boothill Cemetery bares ghostly tales of those who did not survive Tombstone, Arizona. And Bodie, California is known for its deadly curse on anyone who takes even the smallest item from the area. Let us not forget the photos captured of strange figures in Bachelor's Grove, said to be a dumping ground for the mob.

It always baffles me when people would find enjoyment vandalizing these places. How bored can people be? It is one thing to sneak into a moonlit burial ground for the thrill of makeout sessions and fast romps among the tombstones, but it is entirely another demon when monuments that cost lots of money from families who wanted to memorialize loved ones have been toppled over or sprayed with paint for a night of “fun”.

In other ways, the dead have been disrespected by ghouls and seekers of easy money- like macabre entrepreneurs who sold bodies to medical schools. This practice may have actually lead to more knowledge of the human body that we have today. Double-edge sword indeed.

Then there are those who have dug into crypts for fortune. As was the case with the body of President Abraham Lincoln when his corpse was stolen for ransom. A more depraved reality comes from those who put their muscles to work and dig through the six feet of dirt to do mind-blowing deeds, example being that of one lonely farm owner out of Plainfield, Wisconsin. Another example being the unidentified Ghoul of Whitmire Cemetery.

It is not uncommon when Mother Nature herself takes entitlement to vandalizing, such as the heavy downpours of rain that have uncovered some burial grounds and the floating coffins of Hurricane Katrina. A more supernatural event of unexplained destruction comes from Barbados, where the Chase Family vault has become a legend for the repeated ransacking of caskets by an unseen force.

But it is not uncommon for more selfish reasons of defacing these monuments to the dead. People who simply want memorabilia have ruined it for the rest of us. Hence why there is no longer a statue the likeness of the Lizard King on Jim Morrison's grave in Paris, France and why the headstone of Billy the Kid has been caged in Fort Sumner, New Mexico. 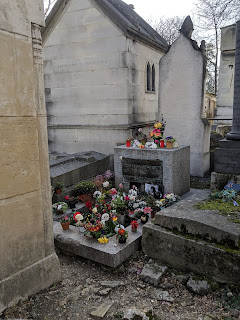 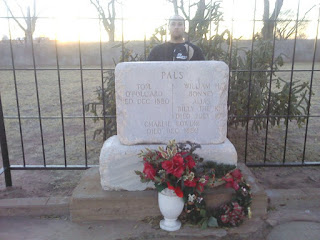 For those of us who have learned to respect the memory of those who have passed on, sometimes centuries before our first breath, these grounds are important places. It is no wonder why the Native Americans guarded their own places of tribute to fallen relatives as the influx of people who marked the graves with stone monuments and crosses may have intruded on their original cemeteries.
It is important to remember to give the utmost respect in these grounds. They are dedicated to the lives of many people who still have stories to tell. 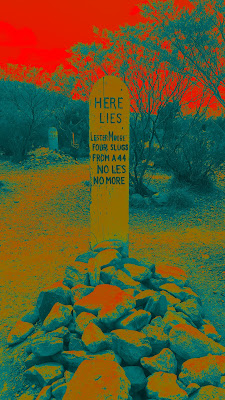 These are stories from different generations across the spectrum of time. Lives of tragic repeats and unsung heroes who heavily believed in the generations of people to be born long after their final breath.

And, whether you believe it or not, your lack of appreciation for their final resting place could very well lead to them following you home.

We speak lightly here where families shed a tear.
Our naked eye unknowing that souls are near.

It's easy to find fate and future if you search hard.
It's easiest if you walk down to the churchyard. 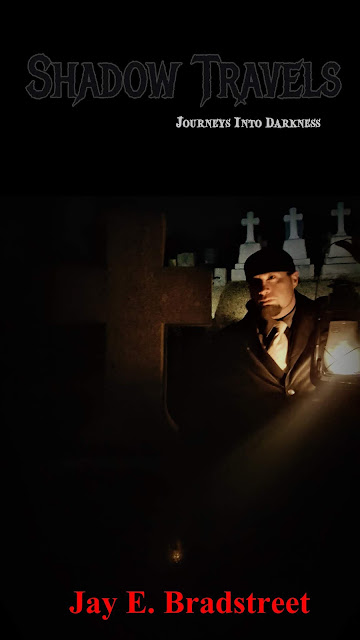